Dr. Lake returns to the Hagmann and Hagmann show to discuss both current events and topics from the Shinar Directive that were not covered in the first interview. It seems like from the very start that the Holy Spirit took over. There were many connect the dot revelations during this three hour show that ended in a powerful Kingdom moment. This interview was so powerful that Dr. Lake wanted to share it with you on KIB.
Download Episode as an MP3 File

This entry was posted in Podcast and tagged Hagmann and Hagmann, Michael Lake, shinar directive.

Because of Grace, God drives man out of the Garden

In this episode, we examine several things:  (1) Did all of the angels fall when Lucifer fell or was their fall progressive throughout history?, (2) The Nachash is the symbol for all illumination within all esoteric societies and this wisdom James calls devilish, (3) God’s grace caused Adam and Eve to be driven from the Garden, and (4) there is evidence that the flaming sword was used by God to divide and separate the three Heavens.

Digging Deeper into Understanding the Nachash

In this episode, we examine further who or what the Nachash is and its possible activities in South America in history.  Then we turn our attention to what really happened in the heart of man when Adam sinned, were did it originate, and its turn nature.  Finally, we examine the promise of God for deliverance and how this deliverance is connected to Passover and the completed work of Christ on the Cross. Powerful session in the Word of God!

Author of the Best-Seller, The Shinar Directive:  Preparing the Way for the Son of Perdition

Getting Deeper into the Mystery of Genesis 3

There was more going on in the Garden of Eden that meets the eye. Adam was called to serve God in the Garden and to be a Watchman. The serpent was more than just a snake, it was the Nachash who came to promise mankind enlightenment and godhood, but separated them from the Kingdom and fooled them into partaking of Lucifer’s nature — iniquity. Allow the Holy Spirit to open your eyes, both to the nature of our warfare, and to the realities of the Kingdom!

Dr. Michael K. Lake is the Chancellor and Founder of Biblical Life College and Seminary and the author of the best-seller, The Shinar Directive: Preparing the Way for the Son of Perdition.

Examining the Son of Perdition – Part 1

Examining the Son of Perdition – Part 1

In my new book, The Shinar Directive, I connect the Son of Perdition with the historic figure of Nimrod within the Word of God. Nimrod’s directive to both draw all men away from God and possibly launch a war on Heaven itself drew an immediate and personal response from the Almighty. Nimrod’s directive did not die with the confusing of the languages; it was only postponed. Since the time of Nimrod, the Mystery Religions have been laboring under the cloak of secrecy to see his directive fulfilled. The Luciferian Elite are committed to creating the proper conditions on planet Earth for the return of their beloved despotic king, the Son of Perdition.

To gain a better understanding of this Luciferian king, I decided to examine Chapter 2 of Second Thessalonians for myself to see if there were clues unnoticed by researchers that preceded this generation. As we draw closer to the revealing of the Son of Perdition, the sorcerer’s cloak of mystery grows thinner. It is my desire to take the present day truths that are being revealed by the Holy Spirit in our generation to pierce even deeper through the Babylonian haze that surrounds this Man of Sin.

Now we beseech you, brethren, by the coming of our Lord Jesus Christ, and by our gathering together unto him,  That ye be not soon shaken in mind, or be troubled, neither by spirit, nor by word, nor by letter as from us, as that the day of Christ is at hand.
2 Thessalonians 2:1-2 (KJV)

Paul is writing to the Church in Thessalonica. A teaching, whether delivered by the power of some spirit through a false teacher or by letter, was stressing the imminent return of Christ in their day (thus, Paul’s statement that the day of Christ was at hand.) In retrospect some nineteen hundred and sixty-four years later, we can see Paul’s point. A lot of history has happened between A.D. 51 and today. A strategic event, similar to the first rise of the Son of Perdition, must take place.

Let no man deceive you by any means: for that day shall not come, except there come a falling away first, and that man of sin be revealed, the son of perdition;
2 Thessalonians 2:3 (KJV)

Have you ever stopped to think about the life of Noah and his family after the flood? Everyone on the planet knew about the only true God and His judgment on a corrupt world that had been contaminated by the Watchers and through the teachings of their children, the Nephilim. (The Nephilim, according to Enoch, became demons after God’s judgment. This fact puts a whole new light on Paul’s statement regarding the “doctrine of demons.” Hebraically, doctrines are not about creeds; they are about the philosophy or ways that one lives his life.) As mankind moved away from the flood, the family line of Ham went to work, and there was a progressive falling away from God. This slow trickle became a tsunami under Nimrod. At the first revealing of the Son of Perdition, there was a great falling away from the knowledge and ways of God. Since the Almighty tells us the end from the beginning (Isa. 46:10), we will see a similar falling away.

Therefore, we see the prophetic pattern that is revealed after the flood. The whole earth must be filled with the knowledge of God, His ways, and the truth of His Gospel. Then a waning begins. It will be slow at first but will gain great momentum as the unveiling of the Son of Perdition draws ever closer.

Today, this falling away is indeed gaining great momentum. In my youth, I imagined as this happened that there would be no church buildings left in use. Everyone would have left the church, become secular, and worked to empower the Son of Perdition. Although the church buildings of many of the faithful are slowly emptying out, I see many mega churches filled to capacity through another gospel. These churches claim to be Christian, but they have dismissed sin and have made everything permissible under the guise of grace. As we examine the very nature of the Son of Perdition, we will realize the spirit behind his power has already been working behind the scenes to create the theologies needed that have brought about the apostasies of today.

This entry was posted in Endtimes and tagged Michael Lake, Mystery of Iniquity, shinar directive, Son of Perdition.

Earlier this week, I had the pleasure of being interviewed by Sheila Zilinsky of the Weekend Vigilante regarding my new best-selling book, The Shinar Directive.   I know that you will enjoy the lively and insightful conversation we had in this interview.

Dr. Michael Lake returns for PART 3 in "The Shinar Directive" and it is the best show yet!

Dr. Michael Lake returns for a third 30-minute interview with Tom Horn and this show goes over the top. You can almost "sense" the old preachers in both men as they say some anointed things about the future, the plans of the Nimrod-ian schemes of occultists, but the better plans God has for his powerful end-times Church!

Dr. Michael Lake returns this week with a brand new 30-minute interview with Tom Horn. Things get even more interesting in this interview with Dr. Lake and Tom introducing the first Genetics Revolution–one started in the ancient plains of Shinar!

In this new series, Dr. Michael Lake will examine how the Kingdom of God is revealed from Genesis 1 to Revelation 22.  In fact, Kingdom is one of the main subjects of the Word of God and is quintessential for the equipping of the Remnant in the Last Days.  In this session, we examine both the Kingdom of God and the Kingdom of Darkness are revealed in the first chapter of Genesis, the mechanisms that God used to displace darkness, how only Kingdom bring abundance, and what God considered the true blessing of mankind.

Dr. Michael K. Lake is the Chancellor and Founder of Biblical Life College and Seminary, a contributing author of the best-seller Blood on the Altar: The Coming Christian vs. Christian War, and the book that is setting the Internet of fire, The Shinar Directive:  Preparing the Way for the Son of Perdition. 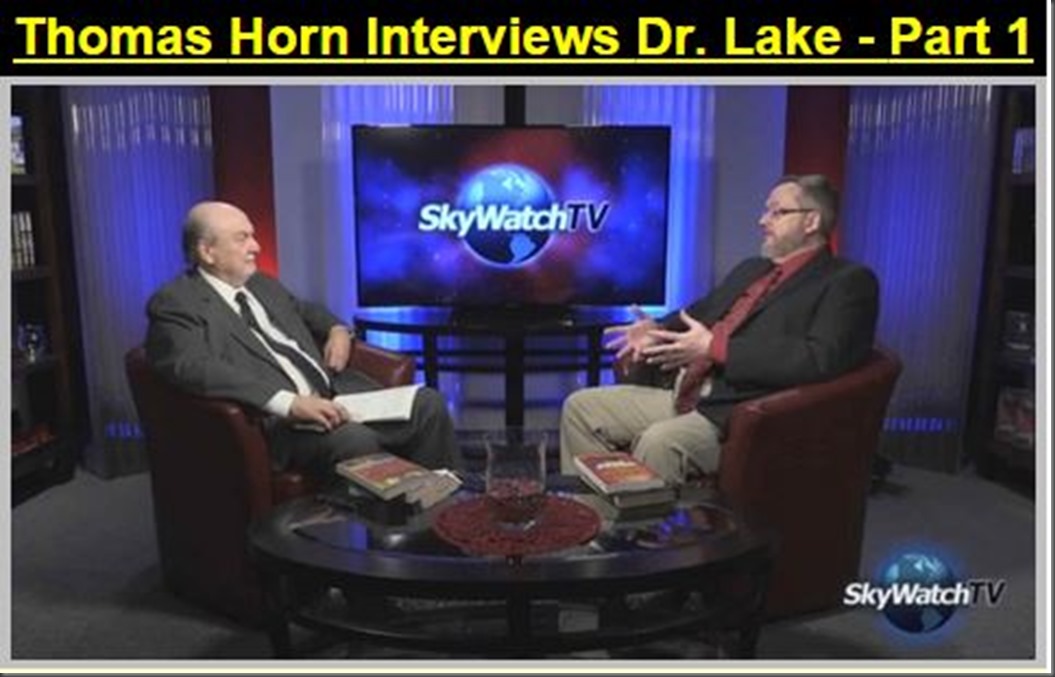 The first episode of SkyWatch TV features Dr. Tom Horn and Dr. Michael Lake discussing the new book, The Shinar Directive:  Preparing the Way for the Son of Perdition.

In the ancient plains of Shinar, an evil was born: the first world king, the prototype transhuman, the ultimate despot, the Son of Perdition—Nimrod. In Babylon, the Son of Perdition devised the Shinar Directive: the enslaving of humanity and the war against the God of Heaven. God’s intervention at the Tower of Babel only delayed Nimrod’s hellish plans. As the powers of Mystery Babylon gather to create the new Tower of Babel and to prepare for the Son of Perdition’s return, Heaven is issuing a clarion call to the Remnant: Know the strategies of the enemy, untangle yourself from them, and become the victorious Church!