Did Nimrod Build More Than Just a “Tower”?

Is it possible that the Tower of Babel was more than just a tower? Was the tower built in a place where there was a dimensional portal to allow “the gods” to enter earth? Dr. Tom Horn shares this possibility in his book, Nephilim Stargates: 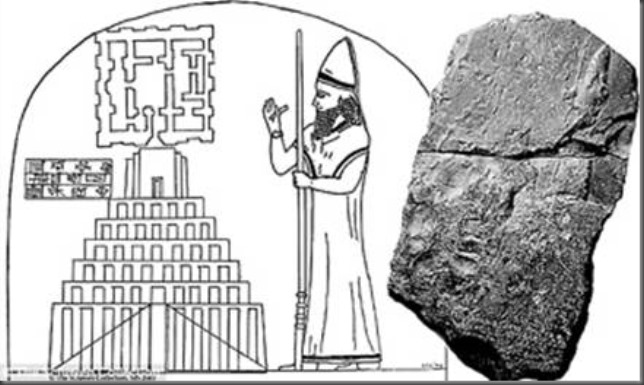 Scientist Stan Deyo has done analysis of a Tower of Babel Stele with speculation about whether the original Tower of Babel was actually designed to facilitate reaching “the heavens” as indicated in the comments above. Was it a building whose top was high enough to allow higher-dimensional beings to descend slowly while discharging voltage directly into the lower energy density universe? Deyo notes the uppermost portion of the stele may show a ‘bright’ or burning circular area, while the edges of the tower layers themselves are smooth like a high voltage insulator, as if for dissipating electricity. Stan emphasizes the analysis is inconclusive at this time, but it is interesting, given that beings who descended from heaven were typically accompanied by fire or lightning (electrical discharge ?), while beings that ASCEND from lower energy densities (regions) tend to cool the atmosphere, such as in the classic ‘ghost’ entering a room. Ancient artwork that may support this theory is widespread throughout ancient times including depictions of gods accompanied by fire.[i]

Perhaps Nimrod was diligently laboring to create more than just an interdimensional landing pad; it is quite possible that he was building an ancient interdimensional portal generator. It is quite possible that the wrath of God fell upon the tower because mankind was “of one mind” to create a mechanism to storm Heaven itself! Now, mind you, they had no better chance of winning than did Lucifer with one-third of the angels. However, their very audacity required an answer from Heaven.

There has been both excitement and dread among the scientific community regarding the experiments at the CERN Hadron Collider in Switzerland. While parts of the scientific community are wanting to find the “god particle,” others are fearful of either creating a tear in the very fabric of space-time or a black hole that could destroy the planet.[ii]

Since the news report above, CERN has powered up its collider several times and has conducted experiments. The scientific community has been both fascinated with the data gathered and has collectively exhaled with a sigh of relief. However, there is more to the story. These experiments were conducted with only a small fraction of the power the collider can generate and in 2015 the titanic machine will be fired up to generate a magnetic field that is 100,000 times more powerful than Earth’s!At that time, “The Large Hadron Collider could open a doorway to an extra dimension and ‘out of this door might come something, or we might send something through it,” has said Sergio Bertolucci, Director for Research and Scientific Computing at CERN. And Aurelien Barrau, French particle physicist at the CERN adds: “The idea of multiple universes is more than a fantastic invention and deserves to be taken seriously.” So were past experiments merely a “knocking on the door” of creating a dimensional portal? Perhaps we have several clues at CERN itself. The first is its logo.

The CERN Hadron Collider has encoded within it the Illuminati signature of “666.” In the minds of many biblical researchers, the logo itself connects the collider with the coming Beast system. Some have speculated that the logo was only meant to resemblesynchrotron particle accelerators.[iii] Yet it is concerning to me that synchrotron particle accelerators create a 666 pattern. It is a common practice within esoteric societies to hide the truth in plain sight and to misinform the uninitiated as to the symbolism’s true meaning.

This entry was posted in Endtimes and tagged Nimrod, shinar directive, transhumanism.